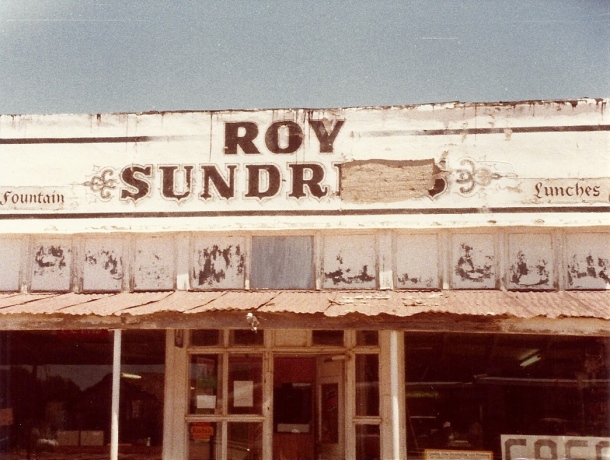 My dad grew up in Roy, New Mexico and I remember so many times as a child when we would visit his sister and husband in Roy.  This drugstore was still in business and we would always go in for an old-fashioned ice cream treat: generally sodas for the sisters and a banana split for my dad and brother.  Can’t recall what Mother ordered.

We would sit at the table where my father had carved his name many years ago and he would reminisce about life in Roy as we slurped our sodas.

This picture was snapped in the early 1980s on a northeastern New Mexico road trip with my sister.  We visited the cemetery to pay homage to our paternal grandparents.  We looked at some of the surrounding area.  We walked the deserted main street.

About  five years ago, my husband, oldest grandson, and I stopped at this very same drugstore.

Bustling (there was a parade prancing down main street!).

Talked to a lady in the drugstore who remembered my father and his family and said that the place (all of downtown, actually) is being renovated and restored and revitalized.  The place was ALIVE!

In fact, only recently, a movie company shot some scenes for Did You Hear about the Morgans? in Roy!

Things are lookin’ up!

Who do you think you are?

Who do you think you are?

Genealogy research is interesting (at least for me) and one finds out some very surprising things.  NBC is helping with genealogy research for several well-known personalities and I’m sure that this series will pique some interest in searching for one’s roots.  Think of Roots by Alex Haley . . .

As Sarah Jessica Parker learns about her family from various genealogical researchers, she exclaims “WOW!” more times than I could count.  That is how anyone who is researching their heritage feels when a new and surprising fact is unearthed.

Sarah Jessica Parker’s Elwell ancestors (Samuel Elwell and Esther Dutch) were living in Massachusetts during the Salem Witch Trials.  It was amazing all the information professionals dug up about Parker’s ancestors.

Records and Files of the Quarterly Courts of Essex County, Massachusetts (a brief account about Parker’s ancestor Osmond Dutch):

“Anthony Day, aged about forty years, deposed that he heard John Meagus threaten Osmond Dutch that if he came into the stage any more to fetch cods more than his own share, he would make his heels fly higher than his head, and would throw him over the stage head.  Sworn Sept. 26 , 1664, before Samuel Symonds.”

Quite likely my Barton family descends from a David Barton, who, with his brother Abraham came to America from England in 1672.  Abraham settled first in Maryland, and subsequently in New England.  David settled on the James River, Virginia, and his descendants continued to live in northern Virginia.  The ancestors of the Keyes/Kees/Keys family were early settlers of Virginia of Revolutionary stock.  [However, this supposition is difficult regarding the dates of a Thomas Barton, who is undoubtedly my first known American ancestor . . . the search continues!  Hoping a Barton researcher happens upon this Aimless site!]

I. – THOMAS BARTON and Unknown Wife

EVERYONE seems to have Texas connections.  In my Barton family is one CONWAY OLDHAM BARTON, son of Conway Oldham Barton, Sr. who was born in South Carolina and lived in Mississippi and Louisiana.

CONWAY OLDHAM BARTON
1856-1941
Conway Oldham Barton, Jr., son of Conway Oldham Barton, Sr., from North Carolina, and his wife, Martha Cox, from South Carolina, was born June 7, 1856 on his father’s plantation in Milam County, Texas, near Calvert, which consisted of three leagues of land with 157 slaves, He had three brothers: Lemuel, John Harold, and Frank, all of whom served in the Confederate States army.
Page 103 {neglected to note the source . . . shame on me . . .}
Said Conway Oldham Barton was educated in a private school at Port Sullivan, Texas Military Academy at Austin, and University of Virginia, 1876-77, taking a course in law, and began to practice at Cameron, Milam County, Texas, and married Mary Blanche Crow, who died in 1882, and had two daughters by her, Manda Galen, who married Felix E. Smith, and Ann Caroline, who died in 1924.
His second wife was Carrie Moshen of Buda, Illinois, whom he married at Las Animas, Colorado, on January 4, 1887. Six children came to this marriage: Raymond O., born at Granada, Colorado, August 22, 1889; Percy O., born Pauls Valley, Indian Territory, February 11, 1897, and the other four children died in infancy. Raymond O. graduated from West Point, and is now stationed with the rank of Colonel at Fort Benning, Georgia.
Conway Oldham Barton moved from Granada, Colorado, to Wellington, Collingsworth County, Texas, where he was elected and served a term as county judge in said county in 1892. In 1895 he came to Pauls Valley, Indian Territory, where he practiced law until the establishment of the United States Court at Ada in 1902, when he removed to Ada and continued the practice of law until his death. In 1910 he was appointed county judge of Pontotoc County to fill out an unexpired term. In the general election that year he was elected to said office and served that full term. He was mayor of Ada in 1906-08.
As a devoted husband and father, he was appreciated and so remembered.
—R. L. Williams

My earliest known (to me) Ellis ancestor is JOHN ELLIS, born about 1685 in Nottoway Parish, Virginia.  John had at least three wives (probably four); my ancestor (I think!) is Mary (surname perhaps Bradley).

Thomas Walker Sr. may be the grandson of one THOMAS WALKER who died circa 1760.  In this Thomas’s will he names a son, Thomas, and two grandsons Thomas.  One is the son of a deceased son and the other is Thomas, son of Thomas.  To this grandson Thomas, son of  Thomas, he leaves a slave, a mulatto boy, Lewis.

In the 1784 Lunenburg County, Virginia Tax Records, Thomas Walker Jr. has a slave listed as Lewis.

Leg:  son William Ellis, 600 acres adjacent lines of Hardaway, Wade, Finney, Samuel Smith, line to be run from Hampton Wade’s lower corner near Jack’s branch to Finney’s nearest corner, but with condition that my son William Ellis pay my son Austin Ellis 50 pounds current Va. money in 3 years after my decease; if he refuses, then I give aforementioned land to my son Richard Ellis, and he pay son Austin 60 pounds to be raised out of my estate & paid by Ex. within 3 years after my decease; son Thomas Ellis; Thomas Walker & Betty his wife, 400 acres L/S Horsepen Creek, being land Walker now lives on & laid off by William Stokes; wife Elizabeth Ellis, labor & profits of 17 Negroes to maintain her & her family, & use & profits of plantation, together with 600 acres adj. for life or widowhood, then to son Richard Ellis; son Richard Ellis, 17 slaves, stock & furn. on plantation, also 16 other slaves, and 638 acres, the plantation he now lives on, incl. mill & land adj. both sides Great Nottoway River, & all rem. of my est.; son Richard Ellis to provide proper support & maintenance for my dau. Sarah Winn; George, Judy & Fanny [slaves] to continue to live on my plantation and not be put under an overseer; son Richard Ellis to manage and direct estate.

Genealogy research is addictive and certainly not everyone’s Cup of Tea.

Now, I realize that no one is interested in my Ellis/Walker/Sammon ancestors – except others who may be researching these particular families.  And I’m hoping that – by happenstance – fellow researchers will come across this site and we can exchange family information.

A distant cousin, Richard Ellis, had a distinctive Texas connection.

Ellis County is named for Richard Ellis, President of Texas’ Constitutional Convention, March, 1836. Mr. Ellis had no direct link to the county. He was a famous Texan whom the state felt needed to be remembered.

Born 1772 (about)  in  Pennsylvania  probably in Cumberland County.  Jacob was Welsh but I don’t believe he was born in Wales; not certain when his parents came to the colonies.

The Surnames of Wales by John & Sheila Rowlands  Federation of Family

“COSLETT This name’s arrival in Wales can be dated to ca 1568  when a man named Corslett was brought over from Westphalia to work for the Mineral and Battery Company  whose owners Schultz and Humphey had a license from the Queen to make iron wire. Corslett was a smith skilled in making osmond iron  a soft iron need (sic) for wire making  and he worked at the forge at Monkswood  near Usk  Monmouthshire and then was sent to Tintern. His descendant George Corslett was born ca 1569 and is named (spelt Coslett) in a list of deponents as a finer of osmond iron in an action between Hanbury and the Exchequer in 1596. Parish records show many Cosletts working at the Machen and Trevethin  forges from late 17c to early 19c. They are concentrated in the area  bounded by Cardiff  Caerphilly  Trevethin and Newport up to the mid 19th century and have a strong connection with the metal industries  though some were coal mining  agriculture  innkeeping and general trade. The IGI before 1850 shows virtually no examples anywhere else in the UK  with the exception of London. The spellings Coslett and Corslett are common  while Corslett can still be found in 19th century records.  Patronyms are entirely absent  but one or two 19th century cases of Coslett occur (DWB). Even today this surname is to be found mainly in Gwent and  Glamorgan (see TD).

DWB=Jenkins (ed) Dictionary of Welsh Biography Down to 1940

He obtained a marriage license May 15,  1837 and was married a short time later.

I  Jack A. Allen, County Clerk in and for the said County in the State aforesaid  DO HEREBY CERTIFY THAT Mr. David Coslett age NA years and Miss Sarah E. Butler age NA years were united in Marriage at NA in the said County in the State aforesaid on the 9th day of January  A.D.  1868  by George Houk  a Justice of the Peace as the same appears of record in my office.

IN WITNESS WHEREOF  I have hereunto set my hand and affixed the Official Seal of said County  this 7th day of April A.D. 1982.

David Coslett  born in Vermillion County  Ind.  the 10th day of June  1842  died at his home on East Second street  at 5:30 p.m. Monday  December 10  1917.  Married Sarah E. Butler  Vermillion county  Ind.  Jan. 9,  1868.  Born to them 12 children  including two pairs of twins  nine of which are now living.  Mr. Coslett and wife joined the Christian church and were baptized in the year of 1886.  They have made their home in Claremore for the past five years  a great part of which time Mr. Coslett has been in ill health. The end came after a stubborn illness which finally claimed his life.  The deceased leaves to mourn his loss an aged wife and nine children.

Funeral services were held from the family residence Wednesday afternoon at 2 o’clock. Interment was made in Woodlawn cemetery.

simple – and tried and true – recipe

I’ve been making this simple recipe for fifty years (give or take a few months).  My mother was an extraordinarily good (read: GOOOOOD) cook (as were her sisters – and is my sister).  I was rarely in the kitchen during my ‘growing up’ years for my mother did it all – and she preferred to do it.

Now, that I have come to love cooking (and trying new recipes), I know why she liked to be alone in the kitchen.  When I’m cooking, I don’t want any help (unless DH offers to do some of the chopping/dicing, etc.  then – I welcome him into the kitchen).

This very simple corn casserole was one of the two or three dishes  I cooked that first year of marriage (all I COULD cook!) and we still love it.  It is extremely simple to make and delicious to eat.  My mom made it; her mother-in-law gave her the recipe (only six ingredients!).

And chock-full of family memories.