1893 According to legend, a unique popcorn, peanuts and molasses confection that was the forerunner to Cracker Jack caramel coated popcorn and peanuts is introduced by F.W. Rueckheim and Brother, at the World’s Columbian Exposition, Chicago’s first World’s Fair.

1896 Louis Rueckheim, F.W.’s brother and partner, discovers the process for keeping the molasses-covered popcorn morsels from sticking together. Louis gives the treat to a salesman who exclaims, “That’s crackerjack!” “So it is,” says F.W. Rueckheim, who then has the words trademarked. 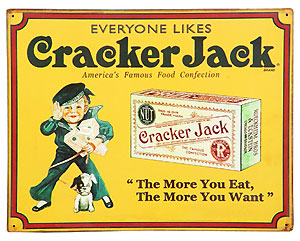 1908 The song “Take Me Out to the Ball Game” is written by Jack Norworth, who writes the lyrics during a 30-minute subway ride, and Albert Von Tilzer, who composes the music. Cracker Jack brand is immortalized with the third line, “Buy me some peanuts and Cracker Jack.”

1955 Cracker Jack begins advertising on television with the appearance of Cracker Jack on CBS-TV’s “On Your Account” which is televised to 130 stations nationally.

Posted in Humor and Entertainment and Music and tagged Cracker Jack, Snacks. Bookmark the permalink.